This is a portrait of a maid painted by Chaim Soutine in 1933. Focusing on a single subject in an unadorned background, Soutine depicts an anonymous, working class figure in the uniform of her profession, with typically expressive and tactile brushwork. Capturing an expression somewhere between weariness and resignation, he underlines the maid’s individuality rather than reducing it.

Painting working people interested Soutine. He also painted waiters, bellboys and servants. The girl sits with slumped shoulders as she waits to be called to work. The darkness of the background suggests night time, or she could be sitting in a room without windows. If she is sitting for the portrait in the servants’ quarters, it could be that she sleeps in a room without light, as she certainly would not have been afforded anything that was considered luxury. Symbolically, the darkness could suggest that she is worn out and tired from her work, or that she has a great sadness upon her shoulders.

Chaim Soutine was a Russian-born French painter whose highly individualistic style, characterized by the use of thick impasto, agitated brushwork, convulsive compositional rhythms, and the presence of disturbing psychological content, is closely related to early 20th-century Expressionism. Soutine was born the 10th child of a poor Jewish tailor in Belorussia. At age 16 he went to Vilna (now Vilnius) in Lithuania, where a friendly doctor helped him attend the school of fine arts for three years. In 1913 he emigrated to Paris, where he met Marc Chagall, Amedeo Modigliani, and Jacques Lipchitz, and attended the École des Beaux-Arts. Modigliani introduced Soutine to the art dealer Leopold Zborowski, who enabled him to spend three years (1919–22) painting at Céret in the south of France. The feverish, visionary landscapes Soutine painted there marked the emergence of his mature style. Soutine spent most of the remainder of his life in Paris. He exhibited little during his lifetime and relentlessly reworked or destroyed old canvases, but his paintings nevertheless found their way into French and American private collections and museums. Soutine died in France in 1943 during the wartime German occupation.

Who is the Girl in the Picture?

What information can we learn about her by looking at the painting? We do not know anything about the actual girl in the picture, as Soutine has omitted her name from the title. The only information we are offered is that she is a maid, and is therefore likely to be poor, and probably uneducated. She is wearing a traditional serving girl’s uniform of black and white, and her dark brown hair is tied up. Her skin is very pink, so perhaps she has been working very hard in a warm room, which has made her look flushed. Her ill-fitting uniform makes her look small and vulnerable.

The composition of the portrait is fairly traditional in that the painting shows the head and shoulders and the subject fills the frame. However, she does not make eye contact with the artist, which is significant. Portraits of people of considered to be of great importance such as kings and queens usually look straight out of the portrait, in an almost challenging fashion. The maid seems to look apologetically away. The portrait is quite dark with the exception of the maid’s face and apron which runs through the centre of the painting contrasting to the dark background and black uniform and drawing the viewer in to look closely at the subject of the portrait.

Soutine’s style of painting is very expressive in this portrait. The features are simplified, especially her eyes, which are very blue and very large. They draw the viewer in, even though she does not look directly at us.

Our eyes are also drawn to her white apron, as it takes up a substantial area of the canvas. It looks twisted as though she is playing with the fabric, or pulling it off. Other colours interrupt the whiteness, which may be stains from the day’s work.

Soutine also profoundly influenced artists such as Lucien Freud and Francis Bacon who in turn went on to have a significant influence on future generations of modern British artists, such Frank Auerbach, whose work is also in the Ben Uri collection. The stylistic, thematic and compositional devices that influenced both Freud and Bacon are clearly evident in this work. 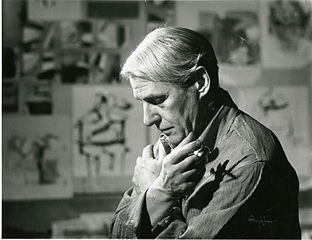 I think I would choose Soutine [as my favourite artist]....I’ve always been crazy about Soutine- all of his paintings. Maybe it’s the lushness of the paint. He builds up a surface that looks like a material, like a substance. There’s a kind of transfiguration, a fleshiness in his work.